Leftover plants from the production – what do I do with them? 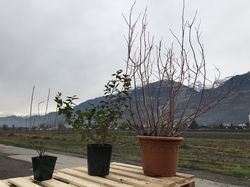 In particular in these special days, when the trade and sale of plants in Germany and Europe is subject to considerable restrictions, some plant producers will probably be worried whether their already produced and ready-for-sale plant stocks can be delivered completely and if so, at what time this will happen. However, apart from the current crisis, it can always happen that plant stocks cannot be completely cleared. As gardeners, we are still very dependent on the weather, despite an increasingly digital environment.

If the plants have not left the company by the planned date, then first of all, consideration should be given to when the existing plant stocks can be sold and delivered. If this is still possible in the spring, then it will be only much later and thus already in the vegetation period. Or is it only possible to sell the plants in late summer, after most of the federal states have already had their summer holidays? This is the central question on which all further recommendations for action are based and established. With the raspberries it does not make a (big) difference whether I am dealing with autumn raspberries or summer raspberries. Because in both groups, the flowering shoots form on last year's woody shoots as vegetation begins. In the production, flowers on fruit bushes are sometimes not welcome, but these can be a clear selling point, especially when sold in late spring, and they can certainly trigger impulse buying. Nevertheless, in order to ensure a good utilisation of the CC containers, it can make sense to cut back the finished plants again to between a third and a maximum of half the plant size. In addition, subsequent fertilisation is also recommended, as experience shows that after the winter there are hardly any nutrients left in the substrate. Fertilisation helps that the plants do not become unsightly yellow at the point of sale.

The situation with blackberries is very similar to that of raspberries. Here, too, the lateral branches with the flowers form on last year's shoots. However, blackberries start to grow later and therefore they flower later than raspberries; this means that pruning is not absolutely necessary. If you decide to prune the blackberries anyway, it is sufficient to shorten the shoots by a third. It is also advisable to apply fertiliser to the blackberries in the spring. Here, however, as well as during production, a subsequent fertilisation with a significantly higher amount of nitrogen should be applied. Blueberries have their first growth spurt in the spring at the same time as they flower. During fruit development and ripening, there is usually hardly any appreciable length growth. This means that pruning is not absolutely necessary. However, fertilisation is anything but disadvantageous for blueberries as well. Just as with blackberries, the fertiliser application for blueberries can be nitrogen-rich. Partial pruning may also be necessary for gooseberries and currants, especially to ensure good utilisation of the CC container when the plants are already in their vegetative phase. Here it is important to note that currants resume their growth much earlier than gooseberries, so (partial) pruning should not be done too late. Fertilisation after the winter is also essential for gooseberries and currants, as the plants quickly turn yellow and then also become unsightly if they do not receive proper nutrients.

Sales starting in late summer with the new production

If raspberries are left standing and are cultivated for another season, pruning is inevitable. This should be carried out as low as possible in order to exclude flowering and thus fruit formation during the cultivation period as far as possible. In addition, this pruning should be carried out at such an early stage when no new basal/soil shoots have yet been formed. These can then grow unhindered and, depending on the number of shoots, can be pruned to obtain a new high-quality plant. It does not matter whether it is autumn raspberries or summer raspberries, both groups of varieties can be treated in the same way. Here too, a balanced and adapted fertilisation at the beginning is essential.

Just as with raspberries, pruning is essential for blackberries. The same approach applies as for raspberries: cut them back as early and as low as possible. This allows new shoots to grow unhindered and form as few flowers/fruits as possible. A particularly important aspect with blackberries is fertilisation. Especially at the beginning of vegetation and the growth of the new shoots, blackberries have a significantly higher nitrogen requirement than raspberries, for example, which is why neither crop can be fertilised. If this is not taken into account, however, deficiency symptoms do not immediately appear. However, fewer new shoots are formed, which also branch less after being pruned. Blueberries can generally be cultivated through another season quite well. However, it has also been shown that the plant quality is positively affected by partial pruning. In contrast to raspberries and blackberries, blueberries are only cut back to a maximum of half their size, which results in a much bushier plant quality. Here too, (partial) pruning should be carried out as early as possible with the beginning of growth. This early pruning ensures that both growth phases of the blueberries can be fully utilised. As with blackberries, blueberries also have an increased need for nitrogen, especially in the second growth phase from mid/end of July. This must be taken into account in the fertilisation concept. As already mentioned, gooseberries and currants finish their period of growth particularly early. As a result, pruning must also take place very early in order to ensure that a high-quality plant grows again. However, since currants finish their growth before gooseberries and thus have a comparatively short vegetation window, the currants, and especially the white and red varieties, should be pruned back to a maximum of half their size. Blackcurrants and gooseberries can also be cut back even further. However, this also depends on the original plant quality (the better the quality, the less pruning is recommended). The relatively short growth window then has a strong influence on the fertilisation strategy. Especially at the beginning of the vegetative phase there is an increased need for nutrients. Here, suitably adapted fertilisation measures can also lead to the growth phase being extended.

In general, it is also possible to repot remaining plants into larger containers (e.g. C5, C7.5 or C10) in order to obtain a large and vigorous solitary plant. Such solitary plants can then possibly open up new sales channels. As a result, this also allows for other sales times when these large plants can be sold with flowers and/or fruits, for example. This is especially useful for smaller container sizes (C2/C3) and/or for special varieties. These include, for example, compact growing varieties or varieties with added values such as particularly striking flowers or an unusual leaf colouration.

Thoughts at the end

Even if the plant sales should not go as planned, whether due to variable weather conditions or extraordinary external circumstances such as those currently prevailing, there may still be ways and means of preventing a loss.

It goes without saying that the paths we point out are not a universal remedy. However, they should serve to show possibilities that even in difficult times things do not have to be hopeless and that something can still be saved. Everyone has to find the right way for his/her business.